The early occupier was E.M Robinson from Green Island and no relation. I did find an article 1921 Estate of Jules Vireaux (son of E.M Robinson), where Tin Kettle and Woody were up for lease.

This 1930 article tells us Robinson Bros had Tin Kettle. Eventually Dolly and Tom Diprose took over Tin Kettle and has passed on through their descendants and remains so in 2014.

I have fond memories of Tin Kettle – the last time I was there the kids were quite young, we popped over for the afternoon. Roy Mac was doing a little scuba diving for cray’s. The young cousins were having a ball mucking around on the beach at low tide. As parents ever mindful of the isolation in this part of the world and we didn’t expect the kids to find a half dead blue ring octopus as they were playing……….. they had no idea what it was. alas us parents accumulated a few extra greys that day! Kids – you cannot take your eyes of them for a minute in the backyard of the Straits. 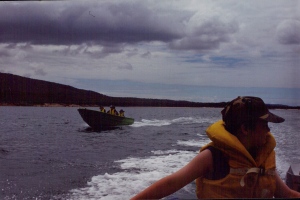