I have learnt on reading a letter penned by my great aunt Ettie Briant (Launceston) to her Grannie (Maria Jane Stephens: Una Cottage, on the Samphire) that Jimmy Holt had just had his second operation and considered in danger until ‘Monday’ and Ettie had intentions to visit him when allowed.

I wonder if this was the time he was incredibly sick after being scratched by his pet cat! Possibly.

In another letter Ettie asks sister Elsie how Mr & Mrs Holt are – a letter to home asking about the next door neighbours is a good indicator of just how close the Holt’s, Briant and Stephens family were. 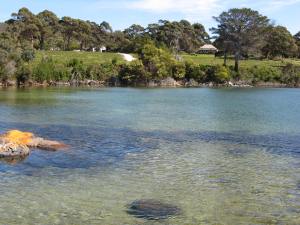 As always there had been a curiosity to the age of the Holt homestead at Badger Corner.

The information didn’t get handed down through the family.

Mr Riddle senior told dad he discovered a newspaper article  papered to the wall inside the home many years after moving in, maybe when doing some repairs. Mr Riddle remembered the Badger Corner and  Kangaroo Is. (built by the Harley’s) homes were built at the same time. Indeed they were as it turns out and the year was 1891 – the article eventually came to light after many dead end searches on Trove. The key words being Kangaroo and Holt. The house was started 2 years before Grandfather Horace was born.

Learning the timber was sourced from Table Cape by account of the correspondent a bonus. Jimmy’s boat around the early 1890’s was the Waratah.

The article also gives a good account of several other old families still associated with Flinders and in particular Mr Riddle…..

December 1914: This Telegraph article is about GGM Adeline Briant collecting money for the Christmas fund and articulates the Robinson/Holt’s surname indecision was still occurring.

Uncle Tucks sons Eric 4 & Ronnie 2 are named in this article as Robinson’s, whilst his siblings were still Holt’s. I had wondered if Uncle Eric had ever been known as Holt. Dad didn’t think so. This article answers that question.

James Robinson would be Tuck and Mrs James Holt his mother Emily. I’m guessing Horace had a tough time and met with more than a little resistance in getting the locals to adopt Robinson.

Horace 1894 and George 1896  Emily and James’ youngest children, possibly born on Long Island under the care of Mrs Burgess as elder sister Dolly was born there.

5 January 1916 – Emily Holt’s nephew James Willett 22 son of James and Fanny joins the AIF – having only recently discovered the Willett’s and the connection to the Collis and Robinson family when linking to mapping our ANZAC did James Willett click. I recall reading the list in 2011, recognising other old Island names, Willett didn’t mean anything at the time, it sure does now.

21 July 1916 –  Horace 22 and George almost 20 sign up to join the Australian Imperial Force  in the footsteps of other lads from Flinders and Cape Barren Island.

With them is close family friend Daniel Thomas Bowman – Dan’s sister Tot, and George were sweethearts.

These photo’s taken in Launceston by Burrows and Co. This photo of George is from the family collection but you can also see it in the in the Weekly Courier 1917  link 25 April 2011 the day I was introduced to the Mapping our ANZAC website (courtesy of my son in-law Chris his ANZAC day address at the end) and so inspired this history journey. Firstly I noticed – Horace and George’s physical characteristics on enlistment were same, I read to Dad, George was the same height as his father 5 feet 10 inches, Horace was 10 pounds heavier, his chest measurement slightly larger, both had fair complexion, blue eyes and sandy hair,  Dad said  ‘Dad and my Uncles always said George was the tallest in the family, he was 6 ft tall’,  for a brief minute I wished I hadn’t mentioned. I didn’t want to be responsible challenging family history about this……… then if I hadn’t we wouldn’t have known this particular story. I finally concluded after a little reflection, this was exactly the sort of history we needed to know, guiding us to understand how the Robinson family revered George, the baby of the family, their hero. Hopefully Dad still believes his Father and Uncles were correct, somehow the medico misread the measurements, and that suits me too!! 14 August 1916 – Horace was discharged on the grounds of being medically unfit. He would have returned home to his family after an emotional farewell with his baby brother, and so begins our George’s journey!