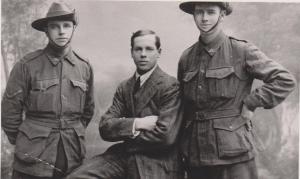 Dan on the left, his younger brother Frank (middle) and George with hand on his hip, what a fantastic photo! It was Dan who was initially with the Robinson Brothers and here is George with the Bowman Brothers in the UK. Frank joining the AIF in 1914 and by the time he had met up with Dan and George had served in Gallipoli 7th Btn, then onto the Western Front around Feb 1916 in the 2nd MGC.

Great photo to mark 101 years since his death.