Last Friday I visited a store in Launceston to look through prints from a stack of glass negatives – Spurling, Whitelaw’s and Charlie Hart era.

What a lot of old photos! Flicking through I came across the photo below. An enhanced copy of the well worn print given to me last year by Elizabeth Holt’s grand daughter. I was able to write on the back the information I knew of this photo from Lizzie’s grand daughter and the publication later found in the Weekly Courier. Other photos had also been identified and information added. There are many photos with names and as many without……

If anyone would like a perfect copy, get in touch through comments and I will give you the information to order.

My cousin could hardly believe the negative still exists. 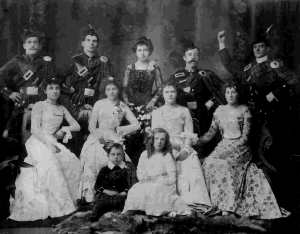 Elizabeth Holt second from left with James Parkinson behind her and little sister May sitting on floor – taken September 8 1902 at the Albert Hall Wakatipu Ball hosted by her father John Holt. 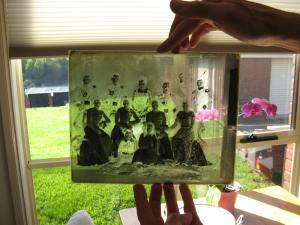 Whitelaw’s negative of the photo